With the release of The Elder Scrolls Online: Morrowind, people who have played previous editions in the franchise can finally experience their favorite game all over again and reminisce about those adventures. In order to officially begin as a new player you need to create your character by selecting one of three races (Wood Elf, High Elf or DarkElf), taking on a class and naming yourself. I decided that this particular session would be my last batch before handing over control to someone else so I named myself “Vestige” because it felt like such an appropriate farewell name for me.

“I’m a veteran of Final Fantasy XIV, but I’ve never played an MMO before. What should I expect?” is the most common question that players ask when they’re considering making the switch to Elder Scrolls Online. This guide will help you understand what it’s like to be a new player in ESO and offer some advice for those who are already familiar with FFXIV. 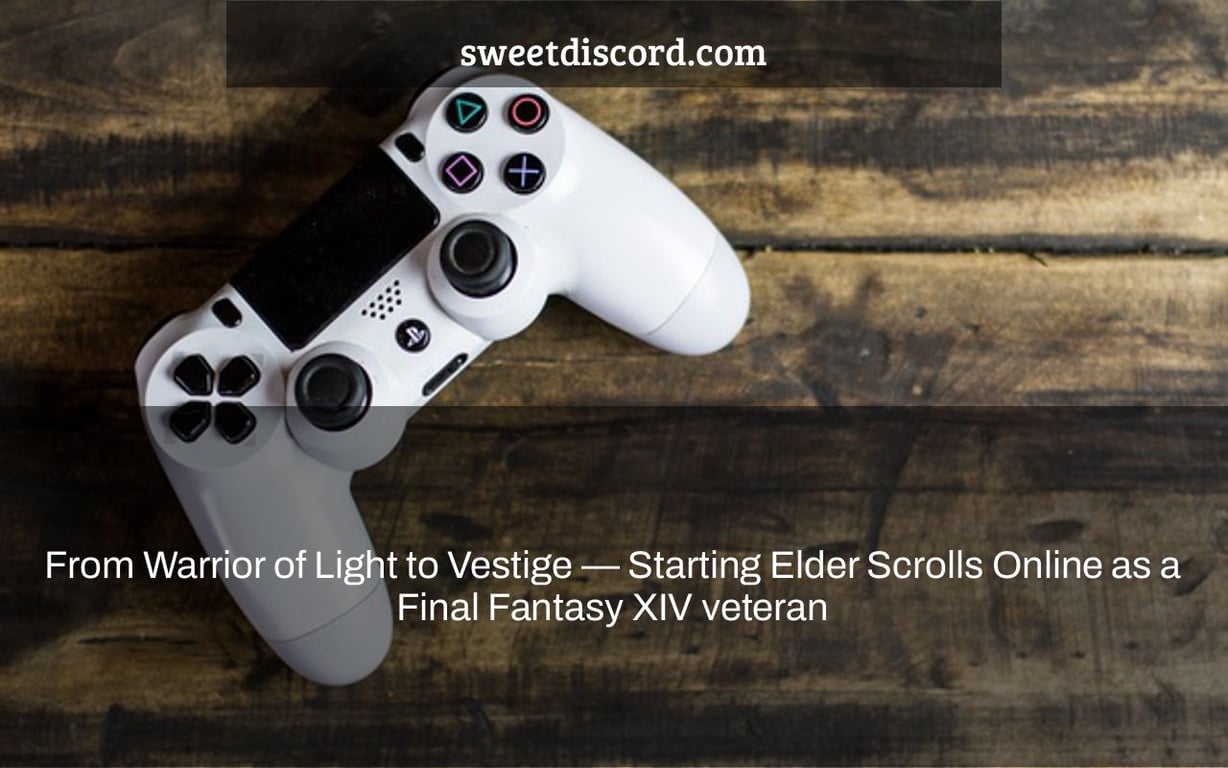 I’ve been playing Final Fantasy XIV virtually religiously since version 1.0, devoting three to four days to nothing but injecting it into my veins and completing each slice of patch content the day it releases. I’d never considered playing a new MMO as a main. Sure, I’d install Warframe or take a brief foray into World of Warcraft, but nothing had the same impact on me as Final Fantasy XIV. So, what made Elder Scrolls Online succeed while others failed?

I bought and installed ESO on the spur of the moment after one of my mentors recommended it as a back-up to my favorite games when they were quiet. But, not long after I created my character, I became engrossed in the world of ESO, to the point of obsession. ESO excels at what it does, and what it doesn’t do is glaringly evident.

ESO isn’t especially pleasant to newcomers, thanks in part to the vast quantity of content and poorly described mechanisms. When you finish the tutorial, you’ll get access to the Keywright’s Gallery, which allows you to take a one-time journey to any of the content sections in ESO’s almost decade-long history. For new players, this modular approach is both a benefit and a burden, as I discovered when confronted with decision paralysis.

However, after you’ve gotten over the learning curve, there’s a lot to offer for those searching for something new. Despite the fact that it is an MMO, it seems like any other Elder Scrolls game: you explore each zone, solving challenges and checking off boxes by plunging into Delves and Dungeons, gathering Skyshards and treasure along the way. You may join buddies, buy and customize vast dwellings, and engage in perilous battles with big monsters.

While XIV’s tale is unsurpassed in the MMO world, the ESO missions are something unique. In my perspective, XIV is a “sum of all parts” sort of experience – the epic journey from foolish explorer to world savior is retold many times during your journeys in Eorzea. Meanwhile, no matter how many global crises you resolve in Tamriel, you will often be seen as a beginner at the start of each chapter. When you arrive to Summerset, key NPCs like Razum-dar are aware that you are the champion who fought Molag Bal, but many of the snobbish High Elves there don’t care. This, believe it or not, feels fantastic. It provides a definite beginning and finish to each segment of the tale, as well as a feeling of awe and finality that was sometimes lacking in XIV. For this reason, the beginning to Shadowbringers is one of my favorites – when you first emerge on the First, you are simply another clueless adventurer to the bulk of the inhabitants, gradually rising to the title of Warrior of Darkness.

Except from the viewpoint of a novice player who is confronted with 200 or more hours of needed material before reaching the end-game — and that’s assuming you pass over a lot of the side content that entices people into other sections of the plot in the first place. In little under 50 hours of gameplay, I got Level 50, CP160 (the maximum level gear would drop at) in ESO by following the narrative. Of course, there’s more stuff after that, since the Champion Point ceiling is 3600, but it’s wonderful to be in the ballpark with others sooner rather than later. This philosophy of “play anything, whenever” extends to the latest addition, High Isle, where brand new players may dive straight in without having to complete any previous chapters or expansions.

Because to ESO’s modular architecture and seamless level scaling, I can play with my pals regardless of their CP level. True, they’ll definitely eliminate creatures quicker than I can, but there’s no penalty, and we can complete whatever tale chapter they choose as long as they have ESO+. In XIV, leveling down to assist a new buddy wastes a lot of my talents and makes the game tiresome to play – Black Mage, I’m looking at you. New players are also unable to access the material I’ve unlocked, which makes logical but restricts what I can do with those who are just checking out the game. It’s difficult to persuade new players that the game only improves until they’ve spent about 50 hours playing A Realm Reborn. And even then, you’re not even close to the finish of the game.

ESO’s adherence to the traditional MMO paradigm of “one character, one class” is disappointing. If I am bored with my Dragonknight, I must restart and try something new. Although the fact that any class may use any weapon and perform any function potentially mitigates this, it still falls short of what XIV does with its smooth Job Change system.

Both ESO and XIV excel in various areas, and both might benefit from learning from one another. While I don’t feel one is superior to the other, I do wish that XIV’s criteria for completing the game were less stringent, and that ESO’s fundamental features were simplified to make them more accessible to newcomers. I’ll always be a Warrior of Light at heart, but I’m having fun as a wandering adventurer in Tamriel, and I’m looking forward to the next adventure in High Isle.

“elder scrolls online vs guild wars 2” is a question that has been asked by many Final Fantasy XIV veterans. The game that they were playing before, was now called “Warrior of Light.”.