In the new Dying Light 2 DLC, players can decide whether or not to adopt a dog named Buddy in hopes that he will become a companion. When it is discovered that his owner disappeared after moving abroad, the player must make an important choice regarding what they want their character to do with him.

In the “dying light 2 true friends” quest, players are given a choice to make regarding Buddy the dog. They can either keep him with them or leave him behind. 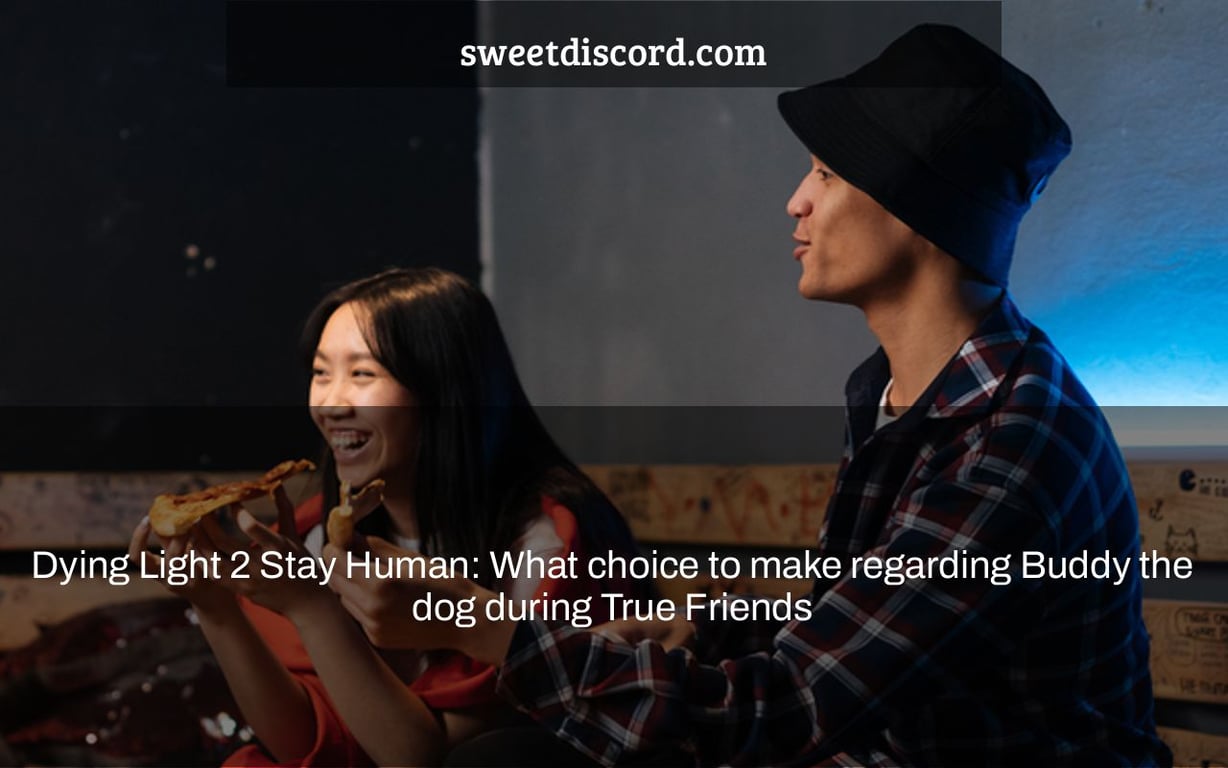 Nerys will emerge in a nook behind the main Vendor in the Bazaar when you finish the Unruly Brother narrative quest in Dying Light 2 Stay Human. She’ll have an exclamation point (!) next to her name and will offer you the True Friends side quest, in which you’ll have to make a tough decision about Buddy the dog.

Leave the church by the closest exit and turn left after speaking with Nerys. A little youngster should be hanging around at the Bazaar’s northwest corner. This is Dominik, and he’ll tell you everything about his dog Buddy, as well as where Moe and Scott normally hang out. To go to King William IX Road, follow the map marker. You’ll hear Moe, Scott, and Buddy as you draw closer, and the quest will update. You must enter a building labelled Restricted Area – either through ledges on the roof or by pushing your way through the gate from the street.

When you open the door, Scott will hurry out and inform you that Moe has been stuck on the building’s top level. Crouch to get through the right-hand gap and either sneak or battle your way past the Infected. Jump from the pile of debris to what’s left of the next story up in the chamber with the fallen ceiling. Swing and leap to the next level above using the horizontal bar. Buddy may be found by continuing northwest then northeast. To talk with Moe, go through the door opposite Buddy.

In Dying Light 2 Stay Human, should you select the Peacekeepers or the Survivors?

You must now return the way you came and kill several Infected, one of whom is very huge. Stay on the top level and utilize any throwable weapons you have (or the resources to make ones). If you don’t want to wait, you may go down and fight the huge Infected up close. It won’t be able to pass through the little doorway on the far side of the room, so utilize it to maintain your distance.

You’ll notice that the mound of rubble has diminished once you’ve slain these Infected, and you’ll need to return by a new path — travel southwest and climb up via the bookshelf. Reconnect with Moe. It makes no difference whether you accuse him of lying or not. It also makes little difference whether you leave the dog alone or put it to sleep. Buddy the dog will not be saved.

Return to the Bazaar and chat with Nerys there. You’ll have one more decision to make here – what to tell Nerys and Dominik – but it won’t have a significant impact on the result. Each decision has a significant impact on how these four characters feel about you and each other. If you lie, the result will be better, but you, Moe, and Scott will have to deal with the consequences of your deception. The consequence will be more unfavorable if you speak the truth, but you will keep your own honesty and integrity. If you suggest Moe and Scott will tell Dominik and Nerys what occurred, Moe will most likely speak the truth, which is the best option. Whatever you do, you will get the same benefits.

The “dying light 2 out of your league quest” is a choice that the player has during the True Friends quest. The player must decide whether to keep Buddy or not.

What happens if you leave the dog be in dying light 2?

A: If you leave the dog be in Dying Light 2, nothing will happen.

Can you save the dog in dying light 2?