Behemoth is one of the most viable PvE subclasses on Titan currently. They make up for their lack of mobility with raw strength, enabling them to tank and deal heavy damage in a fight. The Behemoth’s skillset can be overwhelming at times as they are meant to be able to beat an enemy while taking little or no damage themselves as well as other players by using their abilities aggressively in combat.

Behemoth is one of the most viable subclasses on Titan currently. It has a good range of weapons, and can be played solo or as part of a group. Read more in detail here: destiny 2 classes. 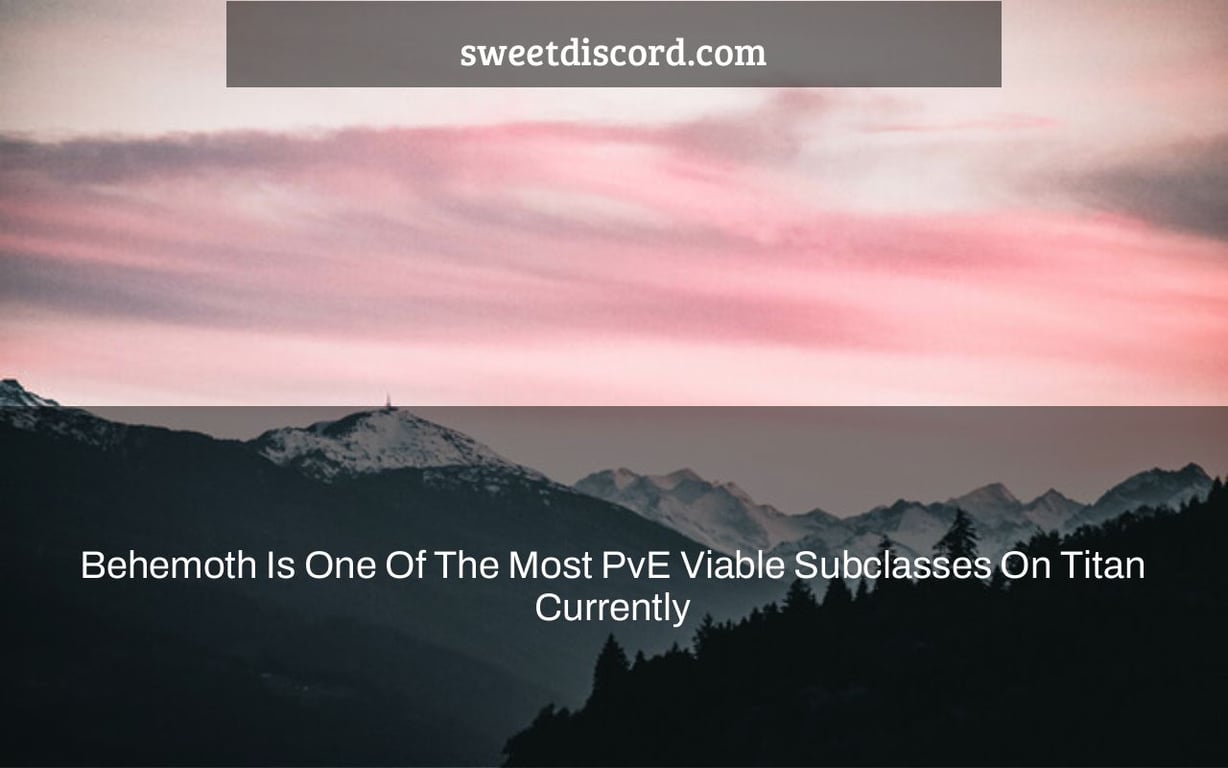 Due to its early prowess in PvP, Behemoth has been battered a few times since Beyond Light arrived, and as a consequence, it has taken a few big knocks in PvE. As we grew closer to the debut of Beyond Light, Behemoth seemed less and less feasible to play. Surprisingly, numerous new Stasis weapons were created in the season when Void 3.0 was released, making Behemoth undoubtedly one of the best classes in the game for endgame survivability.

Now, I understand that some of you may be skeptical of this statement, as Stasis has historically felt weak in endgame PvE outside of serving as a source of additional champion “stuns,” and many of the people I’ve introduced to these builds have been skeptical as well, but I have yet to meet anyone who hasn’t enjoyed the build and experimented with it. So today’s purpose is to expose you to the delights of Behemoth Titan during the Witch Queen period.

I’ve spent the past several weeks playing Behemoth in a variety of configurations, and I’ve settled on two main builds that I alternate between for certain tasks. One is largely for endgame survivability and lethality, while the other is a bit of a gimmick that I use in most main game activities but have also brought into the raid for a little fun. Both of these builds are centered on particular exotic armor and exotic weapons, and I’ll go through the Aspects, Fragments, and modifications I use with each of them in great detail. I don’t expect everyone to appreciate these loadouts copy paste, but I hope they’ll serve as a jumping off point for your own exploration of the class! Without further ado, here are the builds!

I use the same aspects and fragments in both builds, as well as the same modifications, with slight variations when changing my loadout to match my fireteam. However, this is how I usually build up my subclasses:

Armor of the Exotic:

I’m going to rewrite this build into a much more exact analysis by each piece of the loadout since it has a lot of criss-crossing advantages about which I just wrote a book.

The major weapon of Stasis is:

With these considerations in mind, the construct is a bit of a free-for-all in terms of abilities. You toss your grenade and use your stasis weapon to blast through it, doing tremendous AOE damage and regaining around half of your grenade energy very instantly. To receive all of the following bonuses, rush to the shards. Use your melee to kill a weak adversary swiftly and create a lance, or to yeet a major away from you. Your super can be wonderful for ad-blocking, but it may also be highly useful for boss damage. With the next build, this will be discussed in more depth.

Messenger of Death brings in more endgame viability, giving you options for each shield type given Match Game is active, and the catalyst provides an overshield when popping enemy shields with it.

Some changes can be made fast and simply to make this build even more feasible in terms of damage or survivability, but I’ve just highlighted the ones I use most often. You may swap Whisper of Conduction with Whisper of Chains(You suffer less damage from targets when near frozen targets or a friendly Stasis crystal. ), but I like the shards coming to me without much thinking. You may alternatively use the new Hoarfrost-Z exotic chestpiece instead of Precious Scars, but you will lose the quick self-healing ability. If you want to use anything other than a stasis weapon in the main slot, such as Izanagi’s Burden, I suggest making this adjustment. The utility of stasis weapons with these abilities is what makes this build’s combination lethality and tankiness exciting.

Palmyra-B is my primary heavy, with Auto-Loading/Explosive Light as my secondary and Argent Ordnance as my fifth special mod. Font of Might, Explosive Light, and Godslayer Warheads may all be used at the same time, allowing you to fully annihilate a target or do huge damage to a monster. This works well with Izanagi’s Burden, but it can also stand alone in high-end activities.

Synthoceps/Edge of Action – The Goof Around Build

When you read the title of this section, you’ll probably have one of two reactions:

And both of those reactions are reasonable. Following the release of Vow of the Disciple, the Exotic Titan-exclusive Glaive Edge of Action was released. Its unique feature is that you may load a round that releases a bubble when it hits the ground with a full shield charge. That bubble resembles a miniature bundt-cake-pan variant of the Defender bubble, and it offers no extra advantages other than a safe haven that is quite difficult to demolish. I have yet to see it destroyed by damage (but I have yet to test whether it can withstand Rhulk’s kick), so it merely appears to fade away over time.

I struggled for a long time to come up with an usage for this device, since I usually adore running glaives and wanted this one to stand apart. I remembered some functionality late one night.

. Glacial Quake’s slam strike essentially sends out three waves that track along surfaces for a few meters before forming two Stasis crystals at the end of each track when they reach a specific distance. When waves are trapped inside a bubble, they travel along the bubble’s inner edge, forming crystals on the interior. These crystals either make contact with a boss’s hitbox, breaking it and doing damage, or they make contact with YOUR hitbox, destroying it and dealing damage. When you’re in Behemoth, you immediately shatter crystals when you come into touch with them, which means that any crystals that have developed on the inside of the bubble will likewise shatter when they come into contact with you.

“I wonder whether it would work with the Edge of Action bubble…” I wondered.

So now you may take advantage of this silly little interaction without having to rely on a teammate running Defender and conserving their bubble only for your antics. Running Synthoceps with it gives you double damage in super, making it a little more difficult to chonk.

Now, I’m not claiming that this is the be-all and end-all of damage supers. We put it to the test on The Caretaker yesterday, and although his placement wasn’t ideal, we were still able to remove nearly a third of his health bar on one plate using this wacky strategy. It took a few wipes before I felt like we’d given it a fair go, and on one of them, I hit nearly 2.7 million, compared to Celestial Nighthawks’ 900k-something on a Div crit. Thundercrash and Celestial, on the other hand, are still far superior overall DPS choices, since they provide a quick burst of damage that can be used against more mobile bosses while allowing you to continue using other ways like Izzy/Palmyra. This construction, on the other hand, is a lot of silly fun! I’ve used it in a variety of endgame scenarios and it can still chonk monsters even in Master Nightfalls and demolish even unstunned champions in Master lost sectors, but don’t expect it to be great in every situation. It usually necessitates that your target be essentially motionless inside the bubble or quite near to it. As The Caretaker floats away from the bubble, you can watch our damage swiftly diminish.

In terms of the rest of the build, I use largely the same components as the Precious Scars build, with the exception that I forego self-healing and my exotic weapon slot in favor of some wacky damage strategies. I also recognize that this build is now enjoyable mostly because Suppressing Glaive and Unstoppable Glaive are in the game, and that it is unlikely to be as viable next season. So enjoy it while you still can!

Okay, I know I wrote a lot, and it’s impossible to explain everything since it all relies on the minute specifics of each build, but I hope you all take a good look at what I’ve provided and try it out for yourselves. Void 3.0 is a lot of fun, but it’s not the only item available this season, along with the old damage supers!

What is it that the Drifter says all the time? “Embrace the Darkness” is a phrase I’ve never heard before. Yes, please do so.

I understand that the biggest source of suffering for most people is the Shiver Strike melee, and I completely agree with you. Since D1, I’ve been using every Titan melee to its utmost potential, and Shiver Strike is by far the most frustrating one they’ve ever given us. I really wish they’d offer us more super/melee choices for Stasis as they have for the other light subclasses, but I don’t see it happening very soon.

However, like I indicated earlier in the article, this is just a build that I’ve been liking. Instead, you may employ the Howl of the Storm aspect to acquire a new melee that can be beneficial in a variety of situations. I simply don’t utilize it since I like the Lance’s long-range freeze and additional fragment slot. However, I strongly advise you to try out other possibilities for yourself!

How to complete Mission 4: Making space In Teardown

All pets and their effects in Lost Ark